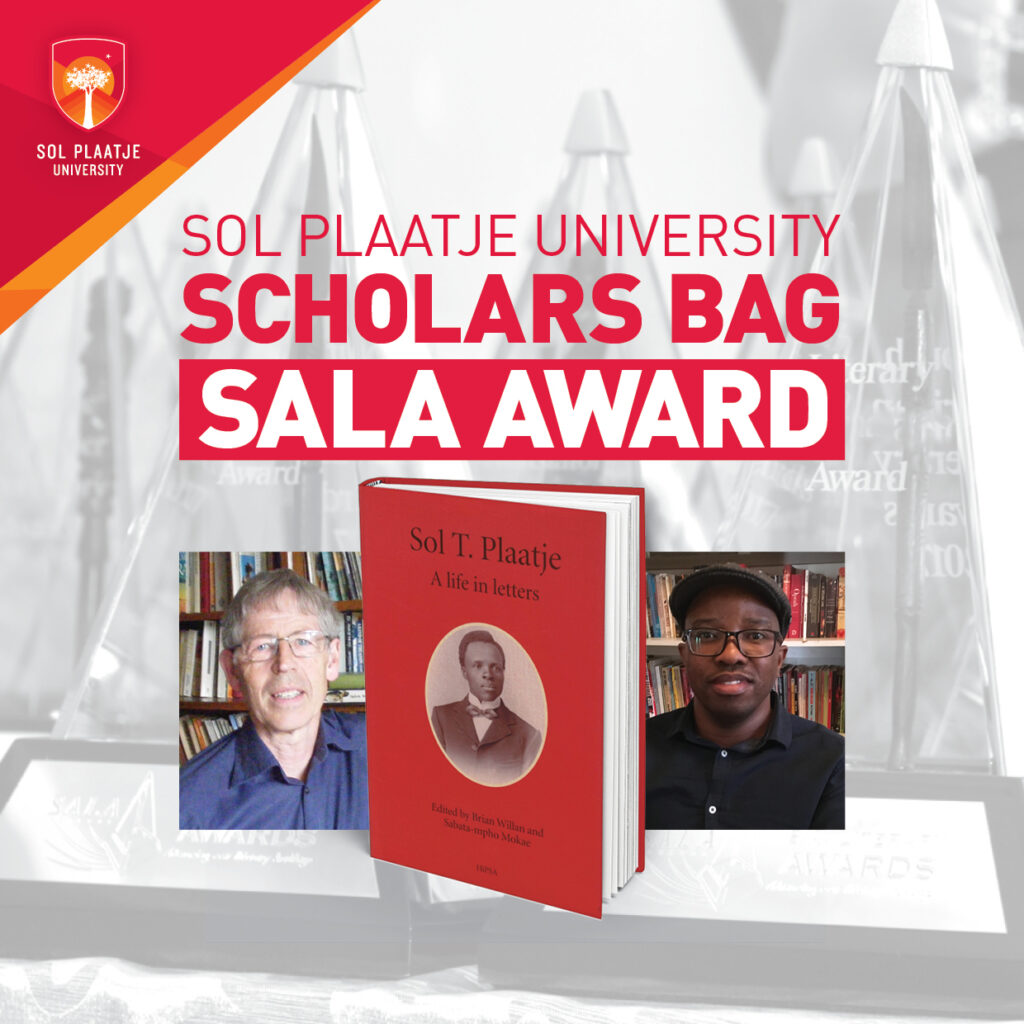 SALA pays tribute to South African writers who have distinguished themselves as ground-breaking producers and creators of literature. It celebrates literary excellence in depicting and sharing South Africa’s histories, value systems, philosophies, and art as inscribed and preserved in all the official languages of South Africa.

Published by the Historical Publications Southern Africa (HiPSA) and launched in November 2020, Sol T. Plaatje: A life in letters is a collection of over 260 letters written by the late Sol Plaatje to members of his family, traditional leaders, his comrades in the South African Native National Congress, De Beers, government officials, community leaders, and well-known political figures such as Marcus Garvey.

The letters record Plaatje’s career as a court interpreter, his involvement in the Siege of Mafeking, the beginning of his journalism career, the formation of his bilingual (Setswana-English) newspaper, his campaign against the Natives Land Act of 1913 in South Africa, Britain, Scotland, Canada, and the United States of America. The letters also shed light on how he conceived and struggled to publish two famous English books titled Native Life in South Africa and Mhudi.

These letters were sourced from archives found all over the world and include South Africa, the United Kingdom, and the United States, to name but a few.

Plaatje wrote over 50 letters in his home language Setswana. These were primarily personal and have been translated into English. Readers can find both the Setswana and the translated versions in the book, categorized by years and context provided for each letter.

“Professor Willan and I are grateful for the support and the space SPU is giving us to pursue our collaborative research writing on Sol Plaatje. We believe that Plaatje was an important figure in South African politics, literature and the development of Setswana as a written language. For a person who died at the age of 55, Plaatje achieved what would take many of us several lifetimes to achieve,” said Mokae.

The Creative Writing lecturer further thanked staff at various international archives who assisted with gathering the letters published in the book. He states that their only regret was not finding letters between Plaatje and his wife, Elizabeth. They, however, remain hopeful that they are preserved and will one day be found and made available to the public to further assist in understanding Plaatje better.

“These letters will help us pay homage to the woman who kept the home fires burning while Plaatje was traveling, writing books and making the world aware of the political situation in South Africa,” said Mokae.